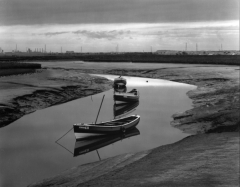 A passion for the outdoors, for the natural and the need to understand more about very specific environments fuelled Ian’s early photographic practice at Greatham Creek on the north Tees marsh between 1970 and 1975.

At Greatham Creek, a very typical inter-tidal salt marsh zone, there was a small colony of house boats. First used by salmon fishermen in the early 20th century, these floating work bases were constructed for purely practical ends. Built from readily available materials, enhanced by the effects of weather, this primitive architecture came to possess an aesthetic of its own.

The decline of this small community became a symbol to Ian of the rapid changes experienced through the middle 19th century and throughout the 20th century from its original natural beauty, through the addition of functionalist structures, which blended into the environment, to the increasingly humdrumness of mass industrialisation.

A careful selection of the work produced at Greatham was put together through 1974-75 and first shown at Dorman Museum, Middlesbrough in 1976 as part of the Impressions Gallery of Photography’s tour of the exhibition into the early 1980s.